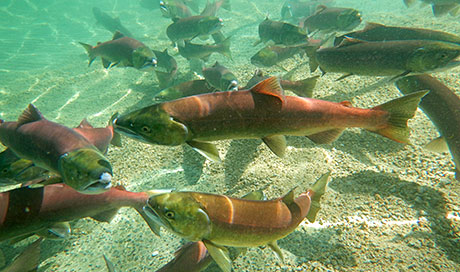 ‘Don’t Give Up On This’: At Summit, Tribal Leaders Urge Action On Dams To Give Salmon ‘Right To Exist’

By Eli Francovich and Orion Donovan-Smith, The Spokesman-Review

SHELTON, Wash. – Act now and act together, or watch salmon runs continue to plummet in the Northwest. That was the message Wednesday (July 7) when tribal leaders from throughout the Columbia Basin gathered for a “salmon and orca summit” organized by the Nez Perce Tribe and the Affiliated Tribes of Northwest Indians.

The leaders came together to call for bold action to save the fish that Leonard Forsman, chairman of the Suquamish Tribe, called “the major unifying factor between the tribes of the Pacific Northwest.”

Tribes have rallied around an ambitious proposal in Congress to remove four dams on the Lower Snake River even as that plan has met stiff opposition.

“We have to do whatever we can now, not kick the can down the road 20 more years,” said Shannon Wheeler, the vice chairman of the Nez Perce Tribe.

Other tribal leaders shared why salmon matter culturally, religiously and ecologically to their people Wednesday morning, setting the stage and mood for the two-day summit.

As they spoke, Idaho Rep. Mike Simpson sat and listened.

Speaker after speaker appealed to Congress to act, but Simpson was the one federal lawmaker there. The Idaho Republican has emerged as an unlikely champion of a bold plan to breach four dams on the lower Snake River and restore tribal treaty rights to fish.

Simpson acknowledged that his proposal may not make it into the multitrillion-dollar infrastructure package that Congress is crafting, but he urged action and said that time is running out to get something done, politically and environmentally.

Simpson’s proposal outlines $33.5 billion in federal spending to breach four dams on the lower Snake River in 2030 – removing earthen berms to restore the river’s flow – and to replace the transportation, irrigation and power generation the dams provide.

The ATNI unanimously passed a resolution supporting the removal of the four dams in late May.

The National Congress of American Indians, the nation’s largest association of tribal governments, threw its collective weight behind Simpson’s proposal when it passed its own resolution in June. In a statement, NCAI President Fawn Sharp said the resolution made clear to Congress and the Biden administration “that Tribal Nations across America stand united on the need to remove these obstacles that are choking our rivers and causing the extinction of salmon and orca.”

“We can no longer stand by and wait for action,” said Sharp, a member of the Quinault Nation. “Now is the time to ensure that there are resources available to make real changes. Now is the time to restore the Snake River to its free-flowing nature. Now is the time, Mr. President, to honor the treaties that your nation made with ours.”

Since Simpson unveiled his proposal in February, it has been met with strong opposition from other Northwest Republicans and has failed to gain the support of key Democrats from the region it would need to move forward in Congress. Numerous environmental groups have also opposed the proposal over concerns that it would substantially weaken two bedrock environmental laws – the Endangered Species and Clean Water acts.

The summit’s organizers invited every member of Congress from Washington, Idaho, Oregon and Montana, said Nez Perce Tribal spokeswoman Kayeloni Scott, but only Simpson was present on the event’s first day.

Rep. Earl Blumenauer, an Oregon Democrat who has expressed some support for Simpson’s proposal while stopping short of endorsing it, was scheduled to address the summit on Thursday.

Sens. Patty Murray and Maria Cantwell, both Washington Democrats, have distanced themselves from Simpson’s plan while acknowledging the need to restore salmon runs. They also have not ruled out the option of breaching the Snake River dams.

In a joint statement in May, Murray and Washington Gov. Jay Inslee, also a Democrat, called for “a lasting, comprehensive solution” based on regional consensus, while adding that the process should take “all options into consideration, including the potential breaching of the Lower Four Snake River Dams.”

Murray and Cantwell have also used their positions on influential Senate committees to push for more federal funding for other salmon restoration efforts, including billions to replace culverts in Washington to aid fish passage.

Most of the invited lawmakers couldn’t attend because of scheduling conflicts, spokespeople said, but their aides planned to participate. Staff members attended either virtually or in person from the offices of Washington Democratic Reps. Derek Kilmer, Kim Schrier and Marilyn Strickland; Reps. Suzanne Bonamici and Kurt Schrader, both Oregon Democrats; and Montana GOP Rep. Matt Rosendale.

Rep. Adam Smith, a Democrat whose district stretches between Seattle and Tacoma, couldn’t attend but had offered to meet separately with tribal officials.

Sen. Jim Risch’s office said the Idaho Republican’s staff would not attend the summit but planned to address the topic directly with the tribe that had extended the invitation.

Reps. Cathy McMorris Rodgers of Spokane, Dan Newhouse of Sunnyside and Jaime Herrera Beutler of Battle Ground had staff members tune in, but all three Washington Republicans made clear they strongly oppose dam breaching and argued Simpson’s plan takes too narrow a view of the threats to salmon.

“This weekend, 10 beaches were closed across Washington State after 58 municipalities dumped raw sewage into Puget Sound,” McMorris Rodgers said in a statement. “Rather than talk about this gross fact that has real consequences for salmon, some are making another attempt to tear out the Lower Snake River dams. This is unconscionable, and it ignores the facts.”

“Breaching our dams remains a nonstarter for any conversation regarding salmon and orca recovery,” said Newhouse, whose office said he had not been invited and learned of the summit just before the Fourth of July weekend.

“Rather than blindly pushing for the removal of our dams, it is imperative that we listen to the science,” he said in a statement. “I am always willing to engage with all of our stakeholders and hope that in the future I will be invited to participate in these important conversations for our community.”

Despite the opposition, Simpson said there remains a path forward.

In an interview after his speech, Simpson said he had hoped to secure funding for breaching and its associated costs before moving forward with the proposal. That was the idea behind linking it with the infrastructure package. If that’s not possible, he said there are other infrastructure bills that he believes parts of the proposal could be linked to.

In an odd way, he said, the recent heat wave that has blanketed the Northwest and further stressed salmon may spur more concerted action.

“It might put pressure on to get this done,” he said.

Wheeler, the vice-chairman for the Nez Perce Tribe, echoed Simpson’s commitment to doing something and doing it soon.

“Well, what if Congressman Simpson’s proposal doesn’t go through? Then what?” Wheeler said. “Well, we’re going to continue to fight. This fight has been going on for a long time, and we’re not going to go away.”

Orion Donovan-Smith’s reporting for The Spokesman-Review is funded in part by Report for America and by members of the Spokane community. This story can be republished by other organizations for free under a Creative Commons license.